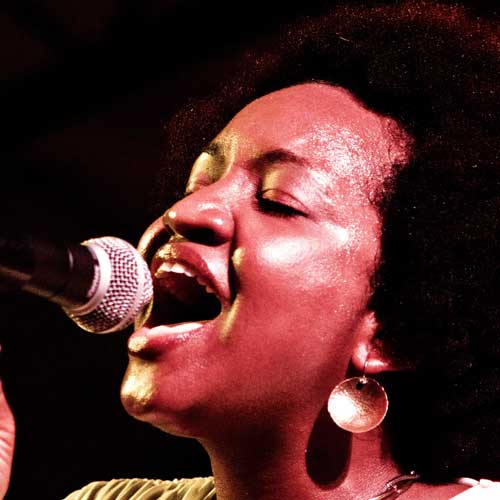 Nicknamed “the little woman with the big voice,” Akina Adderley is a vocalist, songwriter, bandleader, and conductor based in Austin, Texas. Akina is a Black Fret artist, was selected with artists from Austin and Australia to complete the unfinished works of Albert E. Brumley (I’ll Fly Away) and to represent Austin music in Adelaide, Australia with The House of Songs, and in 2012 was honored by a mayoral proclamation of Akina Adderley Day in Austin.

“Jazz is in Akina Adderley’s blood, and it flows with a warm mix of old-school soul and R&B.” –Margaret Moser, The Austin Chronicle

.Akina currently fronts five projects: a new eponymous soul-rock project, Akina Adderley and the Upper East Side (a jazz-rooted neo-soul group), Akina Adderley & The Vintage Playboys (an 8-piece horndriven soul band, with whom she has released two records), Nori (a nu-jazz outfit, with whom she has released an EP and two full-length records), and a straight-ahead jazz sextet.

Akina has performed all over the country and has shared bills with Booker T., Budos Band, and Big Sam’s Funky Nation, as well as local favorites Gary Clark, Jr., Bright Light Social Hour, Bob Schneider, Alejandro Escovedo, and Carolyn Wonderland. She also sings backing vocals live and on recordings for a number of local artists. Audiences “instantly fall for her dynamism and her superstar performance” (Laurie Gallardo, KUT 90.5 FM), and are always moved by what the Austin American Statesman calls her “rich, emotive pipes.” Akina has enjoyed great local success and support; she is a Black Fret artist, a songwriter with The House of Songs, has been spotlighted several times on KUTX with the Song of the Day and the Austin Music Minute, was featured on the cover of the Austin Chronicle (as well as several articles and show recommendations in all the major local publications), and was honored in 2012 by the mayoral proclamation of Akina Adderley Day in Austin.

Akina’s educational background includes a BA from Yale University, graduation from New York’s LaGuardia High School for the Performing Arts (“the Fame school”), and music training from Manhattan School of Music, Mannes School of Music, and The New School.

Akina is the Music Director at Griffin School, where she teaches voice lessons, composition, music theory, and performance.

Akina currently fronts several projects; she has released two albums with her 8-piece horn-driven soul band, Akina Adderley & The Vintage Playboys, two albums with nu-jazz outfit, Nori, and she has plans to hit the recording studio soon with her new soul-rock project. Akina has performed all over the country and has shared bills with Booker T., Budos Band, Bob Schneider, Gary Clark, Jr., Alejandro Escovedo, Pinetop Perkins, Carolyn Wonderland, and Shinyribs. Sometimes a soul singer, sometimes a jazz songstress, Akina will always move you with what the Austin American Statesman calls her “rich, emotive pipes.”