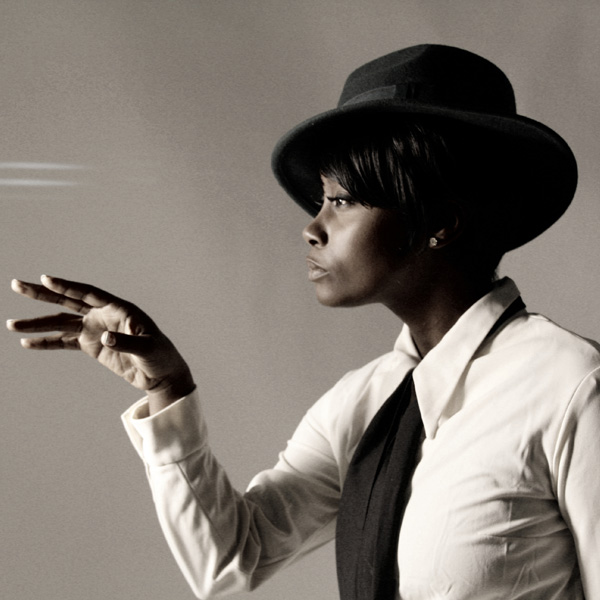 As one third of the best-selling female gospel trio in music history with seven studio records and more than 1.5 million CDs sold worldwide, powerhouse vocalist Chanel Haynes is unleashing her undeniable talents on her first ever solo project, Trin-i-tee 5:7 According To Chanel.

“I am truly excited about this album for so many reasons,” said Chanel. “This album is personal to me because it’s the first album where I was able to write and perform songs that were 100% “Chanel”, and every single decision came from me and my company. It reminds me that I can do all things through Christ who strengthens me. I feel so blessed and empowered to be an example to young artists who carry God- inspired dreams in their hearts.”

Trin-i-tee 5:7 According To Chanel is a 12-track collection including songs penned by Chanel reflecting her perspective and interpretation of Trin-i-tee 5:7 music and PJ Morton. The album is the familiar Trin-i-tee 5:7 sound fans have loved over the years, but now with a blossoming Chanel on all lead vocals as a solo artist, showcasing her unique sound and musical creativity. “Every song I wrote came from a joyful or memorable time in my life,” explained Chanel. “Songs like ‘Masterful’, ‘Believe,’ and ‘You,’ are all songs that are carved right out of my heart and soul. Each song only has one word as its title because I wanted to make sure that the focus is where it’s supposed to be – on the music and lyric.”  The new single, “Repay,” though written and produced by long-time friend, Maroon5 keyboardist and artist in his own right PJ Morton, is still an expression of who Chanel is, but with the enthusiasm and artful touch of this masterful producer and writer.

Born in New Orleans, the daughter of a Pentecostal preacher, Chanel‘s journey in music began with strong roots in the church. She began singing in the pulpit at a young age, and performed her first solo in front of the congregation at the tender age of 6. A big voice in a pint-sized body, Chanel was so short she had to stand on a chair behind the podium so the church could see who was singing. Chanel later went on to direct the youth choir at her father’s church.

Even though Chanel began creating a name for herself locally in those early years by song leading and performing at events in New Orleans, it wasn’t until she was 15 years old, when her career received the boost it needed to take it to the next level. One of Chanel’s heroes, Quincy Jones, heard her voice for the first time and spoke with the producers of star search about her talent. She made it on Star Search on CBS in 1993 where the world was introduced to her big voice and charisma, which ultimately led to her career with Trin-t-tee 5:7.

Her Trin-i-tee 5:7 years were the next chapter in her transformation as an artist birthed out of the church, and they contributed to her musical style and tastes, as exemplified on the group’s albums. Each unique, they progressed toward a sound that takes Chanel today, to a contemporary Gospel/Urban groove that is all her own. Her first solo album as a former Trin-i-tee 5:7 member, announces to the world that she is ready to stand solo in the spotlight and share what will become her signature sound to beloved Trin-i-tee 5:7 fans.  For the first time, 11 songs were written and produced by her, accompanied by her producer Darien Dorsey.

The song “Friends” captures the essence of her relationship with the girls of Trin-i-tee 5:7 through the years; friendship that are still strong today. “I wanted to share with the world the power of true friendship, and that it is one of the most valuable things you can possess in a lifetime,” said Chanel.

Being a part of a powerful, award-winning female group inspired confidence and empowerment in Chanel to be the independent, strong woman she is today, but that wasn’t always the case. The track “Superstar” is a reflection of Chanel’s experiences with self-confidence in the music industry and tells the story of a young girl with hopes of being a star. “The song is really me as a woman talking to myself as a younger girl,” said Chanel. “She doubts herself and is overly concerned about what everyone else thinks of her and her dreams, but the big question in the song is ‘Do you know who you are? Pretty, young girl, you’re a superstar!’”

As a young girl, Chanel was inspired musically and spiritually by music from AndraÃ© Crouch, Sandra Crouch and The Hawkins Family.  Chanel wrote “Believe” to honor them. “My mom played their albums everyday my whole childhood, so when I started working on this song I closed my eyes and imagined I was in the living room with my mom listening to all her old records,” said Chanel. “The words started flowing through me – ‘If you believe it I know you will receive it, have faith our God can do anything if you believe!’”

Al Green an Aretha Franklin are two of Chanel’s favorite artists, and they inspired the vibe on the track “He.” “Al Green’s and Aretha Franklin’s Gospel roots are so evident in all of their music, and I wanted to capture their vibe on this unique song,” explained Chanel. “This song is one that my Grandmother would have loved. It’s all about Jesus and what “He” has done in my life.”

Chanel has lived an inspired life of music, deep roots in church, and a career in Gospel music to match. In 2010, Chanel received the Gospel Music Association’s Lifetime Achievement Award in London for her success in Trin-i-tee 5:7 and is humbled by the blessings and success the Lord has given her.

“I’m looking forward to this new chapter in my career taking the wisdom and strength I’ve gathered over the years to create something I am excited to share with my fans,” said Chanel. “Trini-i-tee 5:7 According To Chanel will hopefully show who I am as an individual singing and writing the music I know and love. I hope this album will refresh fans and inspire listeners to live an abundant life for the Father.”