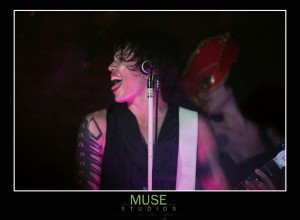 We are big fans of supporting new artists and we hope you are too. We have worked with a lot of artists over the years that we have discovered, resurrected, swooned over and most importantly shared with other fans. Please go see any other these great acts if you ever have the opportunity, you will thank us! Keep in mind that this is rock and roll and some bands may have broken up or traveled heavenward.

Andy Prieboy (Of Wall Of Voodoo)

The Visual Art Of Federico Archuleta

Gary Myrick And Havana 3am

Paul Collins (The Beat, The Nerves, The Breakaways)

Peter Case (The Nerves, The Plimsouls)

Randy Jacobs And The Boneshakers

Will Taylor and Strings Attached

RajiWorld was named in 1991 to honor a great club and keep the name alive. I was booking many of the same acts at UA in Tucson and everyone just assumed my name was spelled the same way as the club.

Raji’s was a rock and roll nightclub in central Hollywood, in the 1980s and early 1990s: one of the great affectionate sweaty smoke filled ‘dives’ of rock, which featured among others performances by bands such as Guns N’ Roses, Redd Kross, Jane’s Addiction, The Dream Syndicate, Tex and the Horseheads, Mary’s Danish, The Miracle Workers, Social Distortion, the Mentors, GG Allin, The Nymphs, and Los Lobos, as well as out-of-town acts like Nirvana, Hole, The Pink Fairies, Pussy Galore and Kyuss. Top-draw local acts like Thelonious Monster, The Muffs, the Red Aunts, The Lazy Cowgirls, Beck, TrashCan School, Oiler, Butt Trumpet, Kill Buddha, the Sacred Hearts, Baby Girl English and many others found enthusiastic crowds as well.

The space had previously been a Greek restaurant called The King’s Palace, which had hosted punk rock shows booked by Brendan Mullen briefly in 1979 after the closing of The Masque. A common gripe about the venue was the large column which rose from the floor just in front of the stage.

Raji’s started to decline after 1991, when the owners of the building decided to take over the booking and operation of the club, and the quality of acts booked there slowly declined. Raji’s closed in late 1993, by which time only bands just starting out played there, and attendance became increasingly sparse. Shortly afterwards, the Hastings Hotel building in which Raji’s was located was severely damaged in the 1994 Northridge earthquake. There were attempts to preserve the structure based on historical and architectural significance, and attempts to get the club going again (to the extent of booking bands for shows which never occurred), which came to naught when the city of Los Angeles denied landmark status to the building. It was torn down by the city of Los Angeles to build a parking lot.

A bar called Raji’s existed a few blocks away from the club’s former location, run by the same family which ran the club in its last two years, until 2007, when it closed due to the gentrification of central Hollywood.

Pigmy Love Circus and The Dream Syndicate both released live albums recorded from shows at Raji’s.