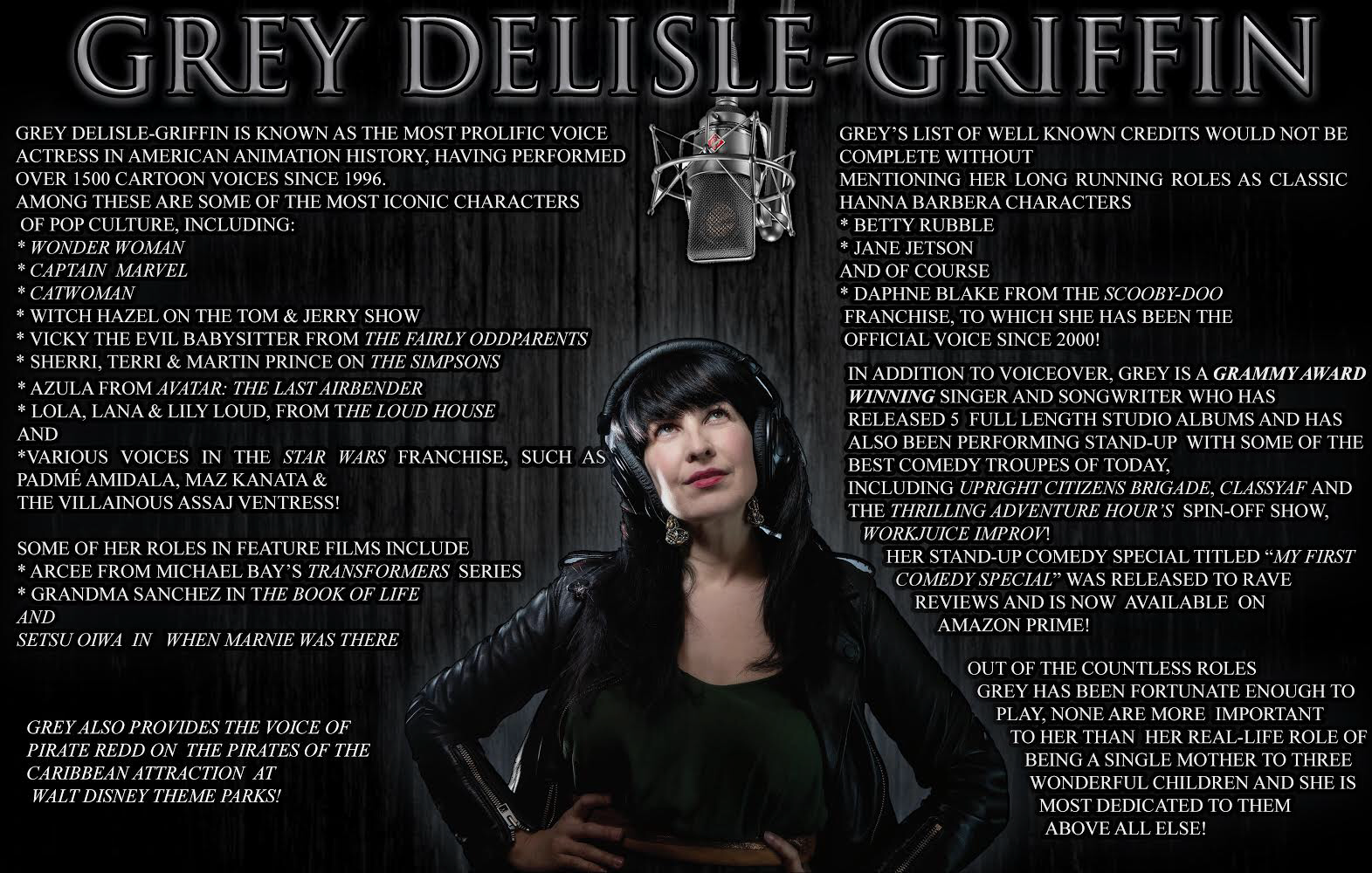 Available now for music, voice, autograph, comedy, lecture and emcee appearances, Grey Griffin (born Erin Grey Van Oosbree; August 24, 1973) is an American voice actress, singer-songwriter, game show host and comedienne. DeLisle has had many roles in television programs, most notably as the current voice of Daphne Blake in the Scooby-Doo! franchise and Mandy in The Grim Adventures of Billy and Mandy. DeLisle has also had voice acting roles in many computer and video games, such as Yangja and Yoshen in Escape from Monkey Island, numerous characters in Baldur’s Gate II: Shadows of Amn, Tomb Raider: Anniversary and Tomb Raider: Underworld as Jacqueline Natla and several Star Wars games. In addition to her numerous English-speaking roles, she also spoke Japanese as Yumi in Hi Hi Puffy AmiYumi. She also voiced Puppycorn in Unikitty! and is now the current voice of Martin Prince and the twins Sherri and Terri on The Simpsons follwing Russi Taylor‘s death in 2019.

For Nickelodeon, she has done several notable voice roles such as Princess Azula in Avatar: The Last Airbender. On Avatar, she also voiced Kya, Ta Min, and Actress Katara. She has also voiced Todd McNulty and Reptar on Rugrats, Vicky the evil babysitter in segments of Oh Yeah! Cartoons that would lead to The Fairly OddParents, where she would also voice her little sister Tootie, Principal Waxelplax, Veronica, Chad, The Tooth Fairy, A.J.’s mom, Happy Peppy Betty, Molly, and Swizzle. She also voiced Brandon Higsby on As Told By Ginger, Mombot and Elke Elkberg on The Adventures of Jimmy Neutron: Boy Genius, Letta, Lenny and the Exo-skin on My Life as a Teenage Robot, Sam Manson on Danny Phantom, Dulce on Angelica and Susie’s Pre-School Daze, Frida Suárez on El Tigre: The Adventures of Manny Rivera, Bronco Betsey, Juanita, and Hanna the Hen on Back at the Barnyard, Portia Gibbons, Millie Millerson, Chai Gallagher, Maude and Lola on The Mighty B!, Darla the Baboon on The Penguins of Madagascar, and Kitty Katswell, R.I.T.A., and Zippy on T.U.F.F. Puppy. She became the first host of Combination Lock from 2015 to beyond, and now voices Lana, Lola, and Lily Loud on The Loud House.