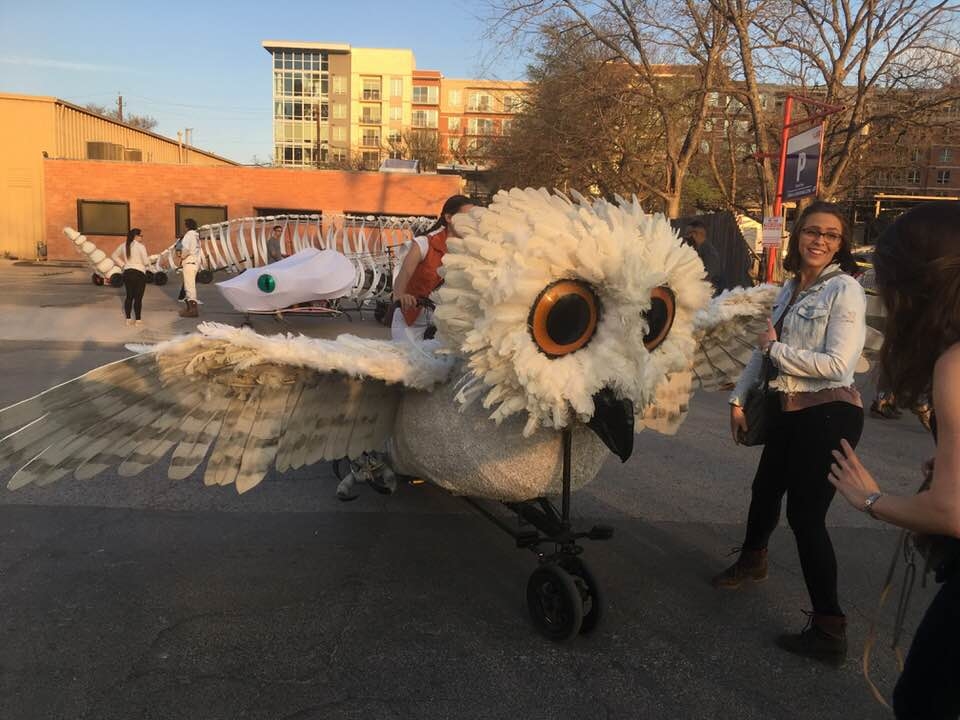 “We are just here at SXSW so that out-of-towners — people from all over the country and all over the world — get to meet us and see what we do,” he said in an impromptu interview. “We’re proud to display this truly original austin artwork that has become an icon in Austin and is truly original.”

The most popular model is the butterfly depictions, several of which could be seen each day of SXSW so far. By Tuesday evening, the menagerie had grown to include several of those versions along with an impressively detailed depiction of a bat.

It was at the entertainment district along Rainey Avenue — closed off to traffic to accommodate the crowds — that the breadth of The Bike Zoo offerings became vividly clear. Rosen was holding court with some of his company’s creations pedaled along the street to delighted onlookers. David Russ rode atop a magnificent bald eagle facsimile complete with flapping wings (wooden but with the textured look of feathers) as he glided by. Another rode a bicycle shaped like a snowy owl that piqued the interest of giddy onlookers.

The eagle has landed, as David Russ takes a break from pedaling

“We have a new armadillo that hasn’t come out yet,” Rosen said, saying the new creation could make its debut as early as April. As he spoke, SXSW revelers surrounded the owl that had come to a stop to allow for picture-taking.

Attracting tens of thousands of visitors from all over the world, SXSW is a real zoo. And the folks at The Bike Zoo wouldn’t have it any other way. To book The Bike Zoo, contact Roggie Baer at roggie@rajiworld.com. For more information, visit austinbikezoo.org or email austinbikezoo@gmail.com.

Postscript: In the waning days of SXSW — as one headed to Rainey Street for one more chance of SXSW fun on the festival’s penultimate day — one’s weariness dissipated at the sight of a bolstered menagerie since this story was first written: The armadillo made its promised emergence as butterflies floated past as if flying above the asphalt.

It was a glorious sight to behold, a perfect end to a fun-filled two weeks of fun. Behold:

The party ended all too fast. See you next year, all. I’ll see you where the wild things are.