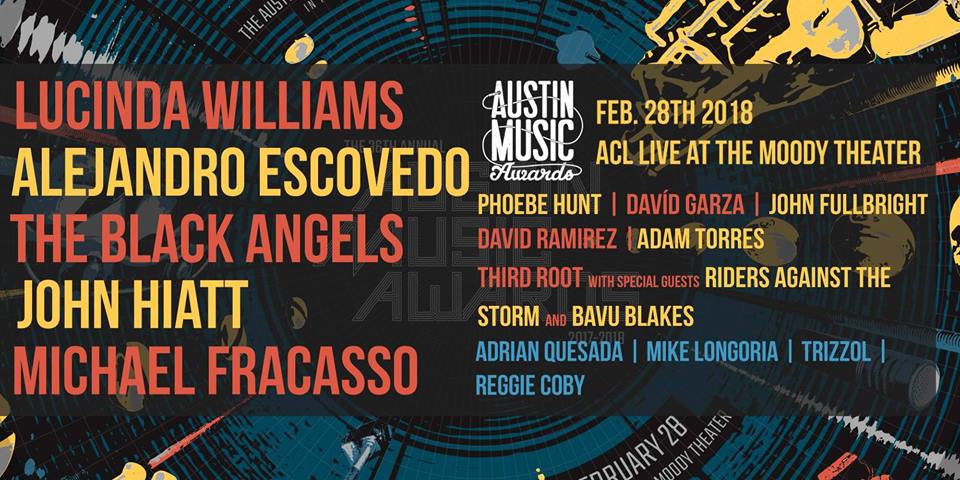 I am excited to bridge the best of the first 32 years with the upgrades brought to the past three years by the new producers, new venue and now, NEW DATE!

Wednesday, February 28th 2018 at ACL Live at the Moody Theater

Celebrating the Live Music Capital of the World since 1982

The Austin Chronicle, SXSW, and Stratus Properties are proud to present the 36th Annual Austin Music Awards on Wednesday, February 28, 2018.

You’re invited to witness history as Austin Music Awards brings an All-Star line-up of legendary performers together including – LUCINDA WILLIAMS, THE BLACK ANGELS, DAVID RAMIREZ, ADAM TORRES and THIRD ROOT with special guests Riders Against the Storm and Bavu Blakes.

For 36 years, the Austin Music Awards have honored the local music community and recognized the best Austin artists, bands and industry masterminds which have forged Austin’s international music reputation. This history-making event recognizes Austin’s outstanding live music achievements of the previous year as voted on by the Austin Chronicle readers in the annual Austin Chronicle Music Poll. From its earliest years, past AMAs have featured numerous genres of music emanating from Texas, including rock, country, blues, Latino, folk, punk, pop, world, and classical.

Without fail – legendary performers, guests, and presenters like Robert Plant, Chrissie Hynde, Fab 5 Freddy, Terry Allen, Blondie, Bruce Springsteen and Pete Townshend have all taken the stage at the Austin Music Awards to celebrate 36 years of Austin musicianship our city is now known for the world over. Who will the surprise guests be this year? Don’t be left out!

Proceeds of the event benefit the Sims Foundation.