“THOSE BOYS FROM CAROLINA, THEY SURE ENOUGH COULD SING..." 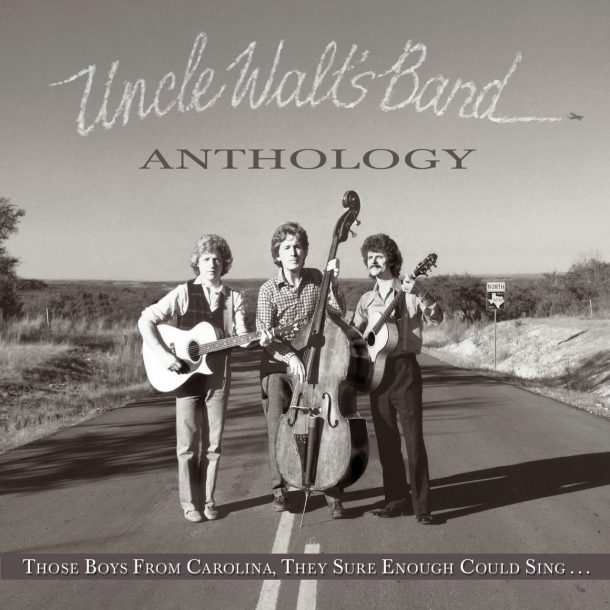 “THOSE BOYS FROM CAROLINA, THEY SURE ENOUGH COULD SING…”

Heidi Hyatt will be releasing an Uncle Walt’s Band anthology 3/9 on Omnivore Records !

In his 1996 song, “That’s Right (You’re Not from Texas),” legendary singer-songwriter Lyle Lovett included a verse about the members of Uncle Walt’s Band, a seminal pre-Americana group originally formed in Spartanburg.

When Lovett was starting his career, he was often asked to open for Uncle Walt’s Band, which had become a fixture on the Austin, Texas, roots music circuit in the late ‘70s and early ‘80s. He never forgot how much of a boost the trio – David Ball, Champ Hood and Walter Hyatt – gave him.

Here’s an excerpt from “That’s Right (You’re Not from Texas)”:

“Those boys from Carolina, they sure enough could sing

But when they came down to Texas, we all showed them how to swing

Now David’s on the radio, and old Champ’s still on the guitar

And Uncle Walt, he’s home with Heidi, hiding in her loving arms.”

Sadly, Hyatt was killed in a 1996 plane crash not long after Lovett recorded the song and just before it was officially released. Hood died from cancer in 2001.

As the sole surviving member of Uncle Walt’s Band, the Nashville, Tenn.-based Ball has lately made some of the best music of his career, but the line “David’s on the radio” appears to be criminally outdated.

In a recent interview, Lovett continued to heap praise on the members of Uncle Walt’s Band. But he didn’t stop there.

Lovett let it be known that he also admires the musically gifted offspring of the influential band.

“Oh my goodness, I stay in touch with Warren (Hood) all the time,” Lovett said. “I think Warren’s amazing. He sounds so much like his dad – his (singing) and the way he speaks.

“I met Warren, I guess, when he was maybe 7 (years old), in Austin. He was always a sweet little boy, and he’s just the same as he was when I first met him. He writes great songs, and he’s a wonderful musician.

First anthology to chronicle the music of Uncle Walt’s Band, includes five previously unissued tracks and we are celebrating in Austin Friday 3/9/18 at The Saxon Pub!

“Walter Hyatt, David Ball and Champ Hood have been an inspiration to me ever since the first time I heard Uncle Walt’s Band,” said Lyle Lovett, a journalism student at Texas A&M University when he first heard the band. “Musically, their finely crafted original compositions reflect diverse influences, while lyrically they demonstrate a sensitive, sophisticated understanding of the dignified South.”

Uncle Walt’s Band, from Spartanburg, South Carolina, was an eclectic music trio that moved to Nashville in 1972 and shortly thereafter to Austin at the urging of Willis Alan Ramsey. ​An attempt at ​an album proved unsuccessful​, so the band headed back to Spartanburg in 1974 where they recorded their own debut LP, Blame It On The Bossa Nova. One thousand copies pressed, sold through performances and self-promotion, disappeared quickly. Heat was gaining for the band so they headed back down to Austin with a reissued album now titled, Uncle Walt’s Band. (Pressings of their original LP change hands for hundreds of dollars these days)

While the album gained many fans and followers it wasn’t enough to sustain the band’s larger ambitions. Going on hiatus for a few years ​,they reunited in Austin at Liberty Lunch in 1978 which launched a second phase for Uncle Walt’s Band that turned out to be the most popular and productive union yet. A second ind​ie album, An American In Texas was released in 1980 followed by a live album from The Waterloo Icehouse, Recorded Live, along with a cassette-only release of studio sessions titled simply, Six • Twenty Six • Seventy Nine.

Gaining the love of Texas music fans, performing regularly throughout the state, yet unable to get the traction nationally​, in 1983 they called it quits again. Although remaining friends and working on various projects over the years, each went on to pursue solo music careers. Hyatt released several albums, plus performed on Austin City Limits, Hood became a Texas Music Hall of Fame sideman playing for artists like Lyle Lovett, Jerry Jeff Walker, and more, and Ball’s success with the hit, “Thinkin’ Problem” established him as a Country Music star.

Back in the late ’70s at Austin’s famed Waterloo Ice House you could find Uncle Walt’s Band fans listening raptly in the packed venue sitting beside the likes of Jimmie Dale Gilmore, Nanci Griffith, Jerry Jeff Walker​, or Marcia Ball. Now, you can pull up a seat next to them yourself. This long overdue collection attempts to right missed opportunities of the past and finally gain Uncle Walt’s Band the recognition they deserve. Enjoy the show!