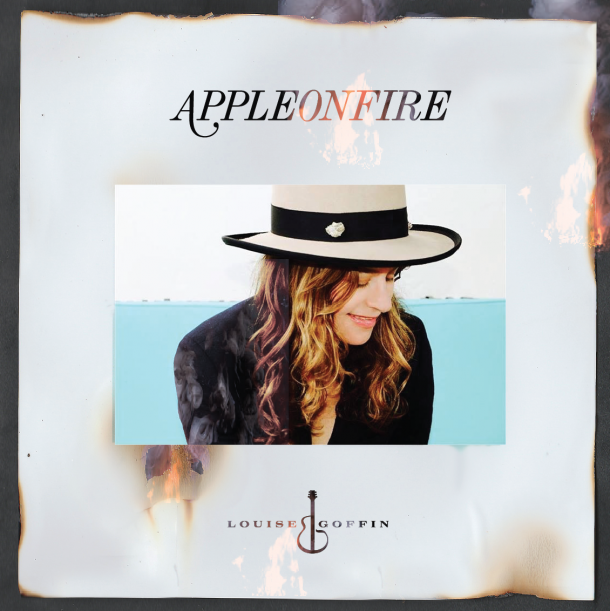 Inspired by the phrase “the apple doesn’t fall far from the tree”, Louise Goffin is herself the fruit of a beautiful musical tree. The daughter of Gerry Goffin and Carole King, Louise comes by her talent honestly, and she’s been faithful to hone her talents on several acclaimed albums over the years. But perhaps none has been as personal as her latest EP, “Apple on Fire”.

After her father’s passing, Louise has channeled the memories and emotions into a new seven-song set now available for fans to pre-order. But not only does it hold the memory of family but friends as well — from a strong guest list to the memory of friend and co-writer, Chris Aaron. She recently took some time out to tell us about this powerful, and personal, project.

Has songwriting always been an emotional passage of sorts, a cathartic way of moving through life?

Definitely. I’d say when I was in my late teens and early twenties, I didn’t trust that part of it as much as I’ve become free enough to now. There were songs I’d written that were put away because I thought they sounded too unfashionable, too unlike what was going on. One of those songs came out of the drawer, a song I wrote with my father and recorded for this EP called “I’m Not Rich But I’m Not Poor”. Even though my part of the song was the melody and chords, I don’t think at that time I could emotionally carry singing the lyric.

Was it clear to you pretty quickly that you would create a musical project inspired by your father?

I started this one off agreeing to record one song and then figured while I had this amazing band I’d also record two songs I’d recently written. And because earlier in the year I had sung a duet of a Goffin/King song at MusiCares with Jakob Dylan, it made sense to invite him to sing on the Goffin/King song “Take A Giant Step” which made it four songs. So in one day, we recorded those first four songs.

The father theme called out. I wanted to do another song that Gerry wrote and that he had originally sung a lead vocal on, because people didn’t know that side of him. He didn’t think much of himself as a singer, but his phrasing as a singer and a lyricist were intertwined with the same intelligence, and a lot of those rhythms and rhymes imprinted on me when I was young. His word choices and vocal delivery inspired and influenced me a great deal.

So the two additional songs I recorded after that first day were what I would call “under-the-radar” songs. “I’m Not Rich But I’m Not Poor” had never been recorded though it may have been pitched to a few artists at the time. It hung around quietly until I recently considered, “What else shall I record on this EP?” That one jumped up saying, “It’s my turn!”

The other one was a gem of a song I’d never heard before. Someone posted a demo of the song on YouTube on June 19th, the day Gerry passed away. Not only was it a find of an undiscovered song, but it had the added rarity that he was singing lead vocal and my mother was harmonizing with him on it.

It took a lot of deciphering to make out some of the words, which no one in all these years had a copy of written down. I recorded it at Red Barn Studios about 15 minutes down the road from Joshua Tree. And then I took the master to Brooklyn to sing it with Joseph Arthur, who eerily sounded a lot like my father when he mirrored the phrasing that inspired me from Gerry’s lead vocal on the demo. I don’t know how that song slipped through the cracks all these years.

You mentioned singing your father’s song “It’s Not The Spotlight” shortly after his passing. Can you take us back to that moment? Was that a healing point at all?

That was a heavy moment. I was scheduled to leave for the airport at 6:00 a.m. on June 19 to do a live interview and performance on KUTX radio in Austin with Jody Denberg the next morning. I also had a house concert the day after that at Polly Parson’s house, daughter of Gram Parsons, for the summer solstice. Tickets had been sold and I was the only performer.

An hour before I was going to wake up too early anyway, I got the call that my father had died during the night. There’s just no way to process that information in any way that makes sense, and that morning it never occurred to me to cancel my trip, although I did continue to reschedule and miss flights throughout the day.

I finally took the red-eye out, bringing one of my children with me. We got in so late, we chose to sleep at my friend and booking agent’s house, since it was closer to the radio station where I had to be in the morning. That next day after the radio interview, I sat at her piano and learned “It’s Not The Spotlight”. It felt like the piano was calling me to learn a song of his to play at the house concert the next day, and somehow that song was one I felt him come through strongest in at that moment. Learning that song was the start of this whole thing.

I hadn’t heard the song in years, but I always loved his vocal on it. The chords were so familiar even though I’d never played it…. well, it’s in the key of C, a familiar key with few black keys, y’know. Anyway I played it in the set, and people loved it, and many recognized it.

When I was back in LA, I saw Barry Goldberg, who wrote the song with Gerry, and I told him I had just played his song “Its Not The Spotlight” live. His response was, “We should cut it.”

Can you tell us about the meaning behind “Apple on Fire”?

For years I’ve been hearing the phrase “the apple doesn’t fall far from the tree.” And the choice of the word fire is in reference to passing the torch, the creative fire, so to speak, which for me is an existential need to create in order to feel meaning in this world. And the the drive and purpose that comes with honoring that need.

The guest list on this is incredible. How’d you bring these names all together?

If you do anything long enough, hopefully you meet everyone at some time or other and keep their phone number.

I’m half joking, but it’s not just that I had relationships over the years, it was also that there was an immense amount of synchronicity, generosity and goodwill associated with this project. I had met Jackson Browne’s assistant at a David Lindley show with my friend Wally Ingram, who plays on the EP, and I said to her, “If you give me your number I promise I will never call it unless it’s really important.” And I meant it. I knew that someone who was an assistant to Jackson probably didn’t give her number out easily.

And so I honored that when I wanted to call her to figure out where I could drop off a copy of my record “Songs From The Mine” for Jackson. But the one number there was no promise not to call was the recording studio where I thought I could leave a message. When I called it, she picked up the phone. I said, “I was trying not to call you!”

When I dropped off my CD, I asked her if there was any day that the studio was not being used and told her about the project. While I was waiting to hear back, I called Chris Aaron in Wisconsin, who I’d co-written “Higher Than Low” with, along with James Hall, the same trio as on the song “We Belong Together”. I said, “I’m going to record our song. I’m waiting to hear whether Jackson’s studio is available”. He said, “I’m sitting next to Jackson. We just played a show together in Madison.” An email came the next day offering a day to record.

Tragically, three months later, Chris Aaron left us, suffering what we think was a heart attack. It was a great loss to so many of us who knew him. So the record has even more meaning with the song on it that we had written just months earlier.

6 years ago in Uncategorized
ArtistsBlogLouise Goffin