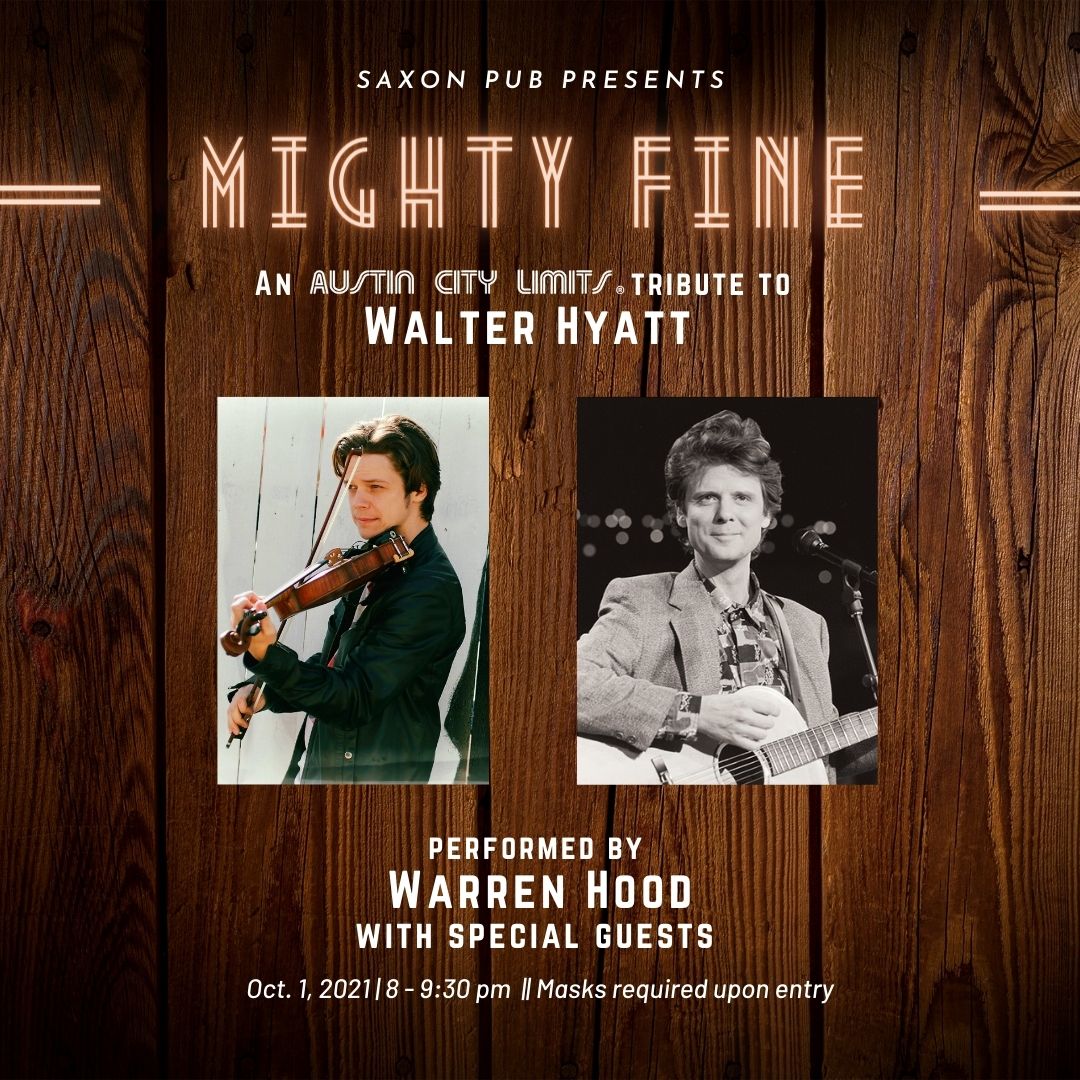 CD Release for the Austin City Limits Tribute to Walter Hyatt. Tickets HERE!!!! and they will sell out.

The Warren Hood band will play live, with special guests to celebrate the  CD of the Austin City Limits tribute to Walter Hyatt that featured David and Champ as well as Lyle Lovett, Shawn Colvin, Marcia Ball, Jimmy Dale Gilmore, Junior Brown, David Halley and Allison Moorer. It was recorded 25 years ago in October. The CD has a release date of 10/1

People ask Warren Hood a lot of questions at the end of a show – what was the name of that song you played – it sounded like Stephane Grappelli maybe, right after the Doug Sahm cover? How did you learn to play fiddle like that? Are you playing anywhere else this week? How old are you? Warren always obliges to answer all of the questions, that’s just his character (the answers are usually something like, “Black Cat”, hard work and listening to the right records, yes, definitely, and older than you think). He cares deeply about the experiences of the people who come to his shows and buy his records and works hard to create memorable live performances and albums.

Warren started playing classical violin at age 11 in the school orchestra, later studying privately with Bill Dick. He won classical music competitions, including the Pearl Amster Youth Concerto Competition and the Austin Youth Award, which gave him the opportunity to perform as a soloist on “Lalo Symphonie Espagnole” with the Austin Symphony, conducted by Peter Bay. Warren later balanced studying at Austin High with touring with Charlie Robison and the South Austin Jug Band. After high school, Warren earned a rare scholarship to Berklee College of Music where he majored in Violin Performance, played with Steven Tyler and formed an acoustic string band, Blue Light Special. At Berklee, Warren earned the coveted String Achievement Award, an award chosen by faculty to honor talent and as a vote of confidence on future success.

Leaving Berklee, Warren returned to Austin and was in demand as a sideman, playing with Bruce Robison and Kelly Willis, Alejandro Escovedo, Joe Ely, and joining The Waybacks, a band he would play with for the next ten years. Through all of this, Warren played with the South Austin Jug Band when he could, especially as a part of their Sunday night residency at Momo’s on W 6th St in Austin. When the residency ended for SAJB, Warren gathered a group of friends and took over Sunday nights under his own name, starting his first solo venture and releasing his first studio record, “Warren Hood”, an eclectic mix of both songs and legendary Austin players including Marcia Ball, Cindy Cashdollar, and Ephraim Owens.

The Momo’s Sunday residency lasted seven years and was a testing ground for Warren where he found his sound, learned how to lead a band, and gave the artists he shared the stage with space to shine – something he had plenty of experience with from the other point of view, having been a sideman for 10+ years. The way Warren ran Sunday nights had a lot in common with the residencies he grew up around in Austin – his father, Champ’s, ‘Singin for your Supper’ at Threadgill’s (Marcia Ball, Butch Hancock, Ruthie Foster, Sarah Elizabeth Campbell, Jimmie Dale Gilmore) and Toni Price’s ’Hippie Hour’ at The Continental Club.

The band Warren plays with now (Marshall Hood and Willie Pipkin on guitar, Nate Rowe on bass, and Jordan Cook on drums) is the current version of the band he started back in 2004 at Momo’s. This band plays every week at ABGB, drawing a mix of “old Austin” and newcomers, musicians and music lovers, and dancers who stay on the floor from the first to last song. The Warren Hood Band plays a mix of their own songs, classic country, and blues, with a nod towards their Texas roots with a few Uncle Walt’s

Band songs mixed in. Warren recorded “Warren Hood Band” in 2013, an album produced by Charlie Sexton and released by Red Parlor Records. A multi-instrumentalist (violin, guitar, mandolin) and accomplished singer-songwriter, Warren is described in the press a lot of different ways: “virtuoso” ”seven time Austin Music Award winner – Best Strings” ”Texas fiddler” ”Chet Baker crooner” “bluegrass picker” – but for him it all kind of blends together into everything he does (and what he does doesn’t always have fiddle). Warren says slyly that “playing different styles of music is like speaking different languages – the difference between violin and fiddle is how you roll your Rs. The more languages you speak the more people you can talk to.”

Warren’s greatest influence is certainly his father, Champ Hood. Champ was a member of Uncle Walt’s Band, an acoustic folk trio from Spartanburg, South Carolina that also included Walter Hyatt and David Ball. They moved to Austin in 1975, prime time for the zeitgeist of the Austin heyday, playing at Waterloo and the Armadillo and building a cadre of lifelong fans. Their intricate harmonies and creative songwriting inspired their contemporaries, many of whom are today’s best loved and most respected songwriters and artists, and continue to touch those who discover their records today. Warren spends as much time with his band as he does playing and recording alongside other artists: David Ball, The Bodeans, Hayes Carll, Joe Ely, Alejandro Escovedo, Robert Earl Keen, Ben Kweller, Little Feat, Lyle Lovett, Joan Osborne, Toni Price, Bob Schneider, South Austin Jug Band, Redd Volkaert, Jerry Jeff Walker The Waybacks, Bob Weir, Bruce Robison and Kelly Willis and more.