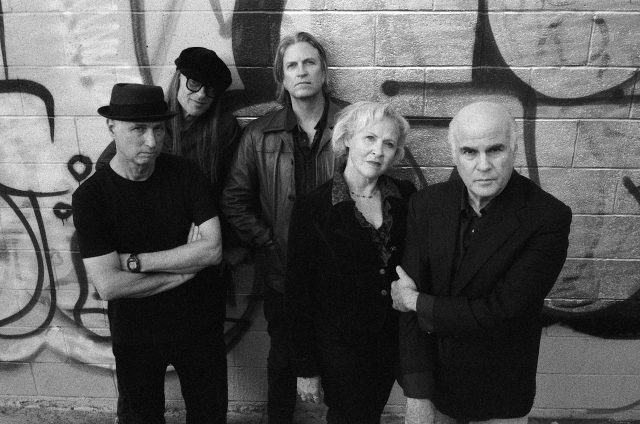 Vote For Your Favorite Albums Released In August 2021

August 2021 Favorite album poll: Vote for three. (Mine were Divine Horsemen, Cruzados and Willie Nile! You have to scroll half way down the page to see poll..

Poll is open until the end of the day September 30.  Top winners will be featured in our playlists.

Albums Of The Week: Divine Horsemen | Hot Rise Of An Ice Cream Phoenix

DAGGER ZINE – Tim Hinely will review and raved about it on Facebook, 7/19; review ran 8/26. Link here

Divine Horsemen, the fiery, eclectic ’80s group that rode the unique vocal chemistry of Chris Desjardins (aka Chris D.) and Julie Christensen, return to the musical stage with Hot Rise Of An Ice Cream Phoenix. Co-produced by Desjardins and Craig Parker Adams (who engineered I Used To Be Pretty, the 2019 release by Chris D.’s groundbreaking ’70s punk band The Flesh Eaters), the new 13-track album comprises the first new music by the Horsemen in 33 years.

Founded after the dissolution of The Flesh Eaters and launched with the 1984 album Time Stands Still, billed as Chris D./Divine Horseman, the band released three albums and an EP on SST Records, all of which featured the searing harmonies of Desjardins and Christensen, who were married at the time. The couple split professionally and personally just prior to the release of their January 1988 EP A Handful of Sand. However, the two musicians remained in touch over the years, and Christensen contributed vocals to five tracks on I Used to Be Pretty, which reunited the 1980 “all-star” edition of The Flesh Eaters heard on the Ruby/Slash classic A Minute to Pray, A Second to Die. By then, the idea of reviving Divine Horsemen was already percolating.

“Julie had asked me about six or seven years ago about doing Divine Horsemen again,” Desjardins says. “I told her I wasn’t quite ready yet, though I did want to do it eventually. Then in 2015 The Flesh Eaters started doing reunion shows. In 2018 we did it some more, and we recorded the album, released it in early 2019, and we went out on tour and supported it. Since the beginning of 2018, Julie and I had been talking about Divine Horsemen again.”

Christensen — who had moved on to work with Leonard Cohen in the 1990s and release seven albums of her own work — adds, “We recorded I Used to Be Pretty in April of 2018. Previous to that we had started plans for a Divine Horsemen tour in the fall, playing older stuff. Chris had song ideas and cover ideas for a studio album — it was just kind of forming in his head. I started looking for covers, too. I did some of The Flesh Eaters ‘live’ gigs the first three months of 2019, and found out that we were getting along really well.”

The singers’ plans called for reuniting with such onetime Divine Horsemen as guitarist Peter Andrus (who had appeared on A Handful of Sand and the 1987 album Snake Handler) and bassist Robyn Jameson, who had worked with Desjardins on the majority of his recordings between 1982 and 2004. However, Jameson tragically died in 2018 following a street assault; Bobby Permanent, Andrus’ longtime musical collaborator, was recruited to take the late musician’s slot on the new recordings. Andrus is also a veteran of bands Crowbar Salvation and Detroit’s The Volebeats. Permanent (under the name Robert Pollard) has also contributed to various movie soundtracks, most notably John Cassavetes’ final film Love Streams.

The 2021 Divine Horsemen lineup is completed by drummer DJ Bonebrakeof the incomparable L.A. band X; he also was a member of the 2018 recording and 2019 touring editions of The Flesh Eaters (which also included X’s John Doe, Dave Alvin and Bill Bateman of The Blasters, and Steve Berlin of Los Lobos). Keyboardist Doug Lacy, another veteran of the Snake Handlersessions, returns to the fold; he and Christensen both later sang backup for the duo of Gaby Moreno and Van Dyke Parks, and Lacy has appeared on several of Parks’ other projects.

The release of Hot Rise Of An Ice Cream Phoenix was prefaced in late 2020 by the release of the vintage recordings Divine Horsemen ‘Live’ 1985-1987 and two Bandcamp singles: Mystery Writers, a new composition by Desjardins and Andrus, and Mind Fever Soul Fire, a song that originally appeared on Love Cannot Die, a 1995 Chris D. solo album. (A new rendition of that set’s title song is also heard as the concluding track on the new album; a high-intensity re-recording of Handful of Sand, the 1988 EP’s title number, is also featured.)

The new material on the album reflects a diversity of sources. “I wanted to mash up some European folk material,” Desjardins says of No Evil Star, a madrigal-like composition. “There are a whole bunch of sites on the internet that have public domain folk songs from Europe, specifically England, Scotland, and Ireland. These are all from the 1700s and 1800s. The music for the verse is from one folk song I found on a Celtic folk site. The words are all original. But the chorus music is not Celtic, it’s more Latin — they also had a few Spanish folk songs on there. Peter joked when we were working up that tune that it was our Jethro Tull song.”

Like Ghost Cave Lament — the sprawling number that concluded I Used to Be Pretty — both Barefoot in the Streets and Stony Path= reflect Desjardins’ ongoing fascination with Spanish flamenco. “Those songs are linked lyrically,” Desjardins says. “Stony Path is a continuation of Barefoot in the Streets. They’re both murder ballad-styled songs. The lyrics of Barefoot in the Streetsis flamenco-inspired, but the music is not really Spanish — Julie came up with the music.” Christensen says the writing of the latter number came late in the recording of the album: “Chris called and said, ‘You know, I’ve just been remiss. I feel like we should write a song together, and I have this “barefoot in the streets” idea.’ He’d already written the lyrics. He had a little bit of a melody idea, too, but not much of one — there was just the scan of it.” She adds that singing Stony Path presented some unique vocal challenges: “Flamenco singers break their voices in order to do what they do.” The song was left for the end of the album sessions, and she nailed her demanding part in a single take. Christensen is represented as a co-writer on another song, Falling Forward, written with Lathan McKay. “He’s an actor and musician who lives in Austin,” Desjardins says. “He’s also the foremost authority on Evil Knievel!”

Beyond her writing, Christensen served an invaluable function by finding outside compositions for the album. “I found a couple of covers from Tennessee writers,” the former Nashville resident says. “Any Day Now is byTim Lee and Susan Bauer Lee. They used to have a band called Tim Lee 3, he was also in a band called The Windbreakers, and now Bark. They used to get hold of Divine Horsemen LPs and hand them out to people – ‘Here, you’ve gotta hear this.’ We got to be fast friends, and their song Any Day Now just floored me. Strangers is by another Tennessee writer named Johnny Duke — he wrote it with Will Kimbrough. I originally heard it acoustically, just him and a guitar. I spoke to him after I heard him play it, and I said, ‘I don’t know if you’d be into this, but I have this band, and I’d love to try doing it with them as a Neil Young and Crazy Horse kind of thing.’”

Hot Rise Of An Ice Cream Phoenix is rounded out by a typically diverse selection of covers. 25th Floor is a Patti Smith–Ivan Kral original, heard on the 1978 album Easter. Ice Cream Phoenix was a vehicle for the vocal harmonies of Grace Slick, Marty Balin and Paul Kantner on Jefferson Airplane’s 1968 LP Crown of Creation. But the album’s greatest curiosity may be the raucous, profane Can’t You See?, an oddball tune that had obsessed Desjardins for years.

He says, “That’s a song written by Charlie Cuva and Robert Downey Sr., for Downey’s movie Pound. I’d heard that song at the Fox Venice Theatre in 1972, in the intermission of a double feature. Robert Downey Sr. had pressed up 100 or so copies of five songs from Pound to send out to independent theaters, as a promotion. It was never commercially released as a record. I had not heard it in years, and the guy who put out my book A Minute to Pray, A Second to Die sent me an MP3 of it. When the prospect came to do this album, I thought, we’ve got to do this. I played it for Julie and Peter, and they went through the roof over it.”

In all, Hot Rise Of An Ice Cream Phoenix stands as a bracing new achievement by a distinctive musical partnership that has always marched to the beat of its own drum. Like The Flesh Eaters’ recent reunion, it’s a welcome return that plays to the group’s historic strengths. “It was really good for both of us,” Desjardins says “and we really enjoyed it. There’s also — unintentionally — context in some of those songs about what happened between us as a couple.” Christensen adds, “One thing Chris has always been adept at is taking a song, and you hear the raw bones of it, and then he casts the band so well, and he runs a rehearsal like a tight ship. We would fashion these gems of songs out of rocks. He’s always been really good at directing a song toward what it’s supposed to do.”

It should be noted, in addition to producing (or co-producing) all of his Flesh Eaters and Divine Horsemen efforts, Desjardins has a modest but important legacy as an A&R man/in-house producer at Slash/Ruby Records from 1980-1984, co-producing with Tito Larriva seminal work by The Gun Club(their debut album Fire of Love), producing The Dream Syndicate (Days of Wine and Roses) and Green on Red (Gravity Talks), and mixing with Glenn Danzig and The Misfits (Walk Among Us). He also shepherded The Lazy Cowgirls on their eponymous debut. Last but not least, Desjardins produced Soulsuckers on Parade, a wildly unhinged, never-available-before-to-the-public 1984 session by Jeffrey Lee Pierce (with a backing group of then-BlastersDave Alvin, Bill Bateman, and Gene Taylor, and Green on Red’s Jack Waterson) that is only now being released in 2021 — 36 years later!”