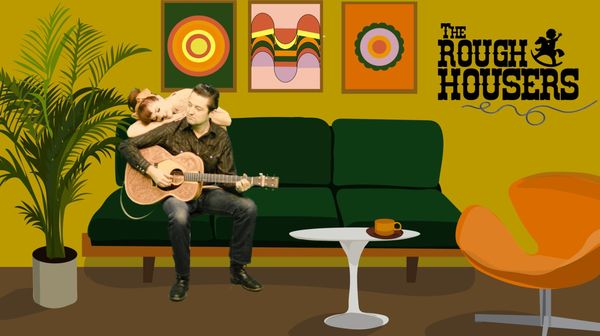 Grey DeLisle, former recording artist for Sugarhill/Vanguard is about to release her debut album for Regional Records. The covers album, aptly titled “Borrowed” features a James Bond theme song “You Only Live Twice” featuring The Satellites Four (originally recorded by Nancy Sinatra). The single will be released Oct, 20, 2021 and the album will drop in 2022. She’s also releasing an all-original album for kids in February of 2022 with her band The Roughhousers featuring Eddie Clendening, Deke Dickerson, Murry Hammond (Old 97s) and DJ Bonebrake (X).

Grey DeLisle Griffin is also known as the most prolific voice actress in American animation history, having performed over 2000 cartoon voices since 1996. Grey is also a comedian who launched her first stand-up comedy special, “My First Comedy Special” on Amazon Prime which has received rave reviews.

from “Avatar: The Last Airbender,” ‘Kimiko Tohomiko’ from “Xiaolin Showdown,” as well as ‘Lola,’ ‘Lana’ and ‘Lily Loud’

from “The Loud House”, Monster Girl on Invincible, Delilah Briarwood on Critical Role’s Vox Machina, Ms. Chalice on Cuphead and ‘Prince Puppycorn’ from “Unikitty!.” She has also been the voice of ‘Daphne Blake’

Her film roles include ‘Grandma Sanchez’ in “The Book of Life,” ‘Arcee’ in “Transformers: Revenge of the Fallen” and “Bumblebee,” ‘Dewdrop’ in Pixar’s “Onward” and Setsu Oiwa’ in Studio Ghibli’s final film “When Marnie Was There.” She is also a Grammy-winning recording artist. Grey is a single mom to her 3 kids (ages 5, 7 and 15) and she’s basically kicking butt.

Eddie Clendening brings with him over two decades of experience on the stage. Having appeared with early ROCK & ROLL greats like Scotty Moore, James Burton, Pat Cupp, Hayden Thompson, Billy Lee Riley, EarlPalmer, Dale Hawkins, Gene Summers, Jimmy Lee Fautheree, Jerry LeeLewis, Little Richard, and scores of others. Contemporary musicians are also taking notice of this explosive and handsome young frontman for not only his vocals, but also his work on the electric guitar. Eddie has toured extensively and successfully with his own backing group “The Blue Ribbon Boys” in not only the U.S. but Europe, Asia,Australia, and elsewhere.

He has also worked with other well known groups such as Deke Dickerson’s Ecco-Fonics, Big Sandy, The Hi-Qs, LloydTripp… the list goes on and on. He has been invited to perform at dozens of international music festivals, The Rockabilly Rave, Viva Las Vegas, Hemsby, Le Blues Autour du Zinc Rockabilly and so on… not only with his own combo but also as the vocalist for the reunion of “Go Cat Go”, one the largest selling roots ROCK & ROLL groups of the 90’s who tragically lost their singer in 1993.

He has appeared on several ad campaigns for fashion brands likeW.H. Ranch Dungarees, J.S. Sloan, and Ralph Lauren, coast to coast, prime time, and regional television programs such as The Late Show with David Letterman, Late Night with Jimmy Fallon, The View, Today Show and more. He has also been a regular voice on various satellite/AM/FM/internet radio programs. Eddie originated the role of, and was featured as Elvis Presley in the hit Broadway musical “The Million Dollar Quartet”, where he performed 8shows a week to packed houses racking up over 2200 performances! He also helped create and starred in the show “Heartbreak Hotel” which is currently the only Elvis Presley stage bio endorsed by the Elvis Presley estate, SONY Music and RCA.

He’s continued to be seen on stage in plays and tribute shows to many of the other greats as well, Buddy Holly, JohnnyCash, and Carl Perkins to name a few. And he continues to be in demand wherever fans of ROCK & ROLL gather. It seems Eddie is also beginning to get some much-deserved acclaim, thanks to the release of his four studio albums to date; “Sometimes It Rains”, “Eddie Clendening Is… Walkin’ And Cryin’”, “Eddie

You will never forgive me if you do not get your eyes on these videos first, grab your kids and the naughty neighbor, have a party. You will never be the same again;)