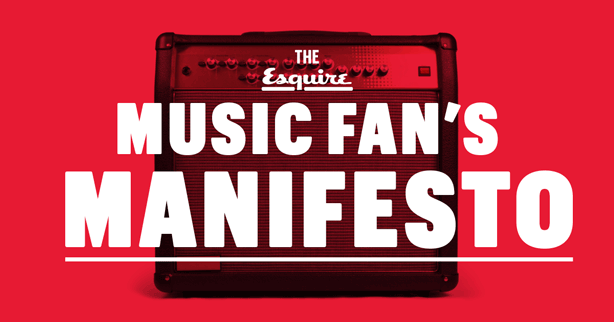 First albums. First concerts. That song you can count on to change your headspace. The band you were first on your block to like. The soundtrack to your first wedding dance. Your patented karaoke go-to.

Reports on the death of music are greatly exaggerated. Music will always be more than sales figures. Spreadsheets don’t reflect the music that lives on subway platforms. Or music that’s played at a second line jazz funeral in New Orleans.  Also not quantifiable: the song you never want to hear again because it reminds you of her. A chart will never reflect that moment when a four-year-old asks his father from the backseat to play “Yellow Submarine” again. And music is most certainly, unequivocally, more substantial than ones and zeroes, even if that’s how it’s delivered to us these days.

High-speed internet. Smartphones. A cloud containing every album ever made. We’ve gone from Thomas Edison to Beats by Dre. From churches and campfires to server farms and satellites.

FACT: MUSIC IS MORE ACCESSIBLE THAN IT’S EVER BEEN. QUESTION: HOW CAN WE BE BETTER MUSIC FANS FOR IT?

Every sea change brings in high tides and low tides. At risk is the tacit contract between artist and audience, between those who create and those who consume.

We’re letting social media fundamentally change what it means to be a music fan.

We need a refresher. We need to be defensive. But we should be proactive. We need to rethink what it means to call yourself a music fan.

A MUSIC FAN IS ALWAYS ASKING, “WHAT’S NEXT?” BUT HE ALSO KNOWS WHAT CAME BEFORE.

He knows about the crossroads. He knows Little Richard. And CBGB. And at least one probably apocryphal story about Stevie Nicks. Wikipedia is your friend.

A music fan knows immediately when Amazon’s “If you like this…” algorithm has it all wrong.

Fact: A basic sustaining membership at your public radio station costs less than a year of Pandora. Pandora’s pretty great though.

A music fan knows most of the words to “My Way.” And at least half of “Like a Rolling Stone.” He can also make the “Single Ladies (Put a Ring on It)” hand gesture. But only when asked. Preferably on a bet.

PAYING $2 MORE FOR AN ALBUM AT A RECORD STORE THAN IT COSTS ONLINE IS GOOD FOR THE SOUL.

And there’s no shipping and handling. Until a drone can deliver Beck’s new album to your door, record stores are still the best instant gratification money can buy.

Plus, record store clerks know what song you’re talking about when you hum them a few bars. See how that goes with Siri. Or a Starbucks barista.

Only we can stop record stores from becoming record museums.

A music fan recognizes that escapism isn’t real culture. Culture is a commitment. Beatlemania was commitment. And say what you will about Deadheads and Juggalos, but you have to respect the commitment. Hitting “Like” on a Facebook fan page isn’t commitment.

A music fan knows instantly when a musician’s Twitter account is being handled by a social media intern.

A music fan shares links to music they love on their Facebook page.  It’s never about the number of likes those posts receive. It’s simply that you shared.

Rule of thumb: Every time a friend posts a cat video on your page or comments on an Onion article like it’s a real piece of news, post two pieces of music.

Imagine a concert where everyone keeps their phones in their pockets. Imagine a flying car. Same likelihood. But it doesn’t make the guy shooting photos with an iPad in front of you any less annoying. And yeah, iPad. Jeez.

The Dead had the right idea with taping sections. Cell phone sections are the inevitable next step. So are yet more blurry pictures and shitty videos.

YOUR MEMORY OF SEEING JAY Z WILL ALWAYS BE BETTER THAN THE PICTURE YOU TOOK.

…But for better or worse, taking a photo at a show to document that you were there is part of being a music fan. You want to show friends. You want to prove down the line that you saw Jay Z play a small club show. We get it. One and done though.

It doesn’t take a trained eye to look at the thumbnail of a YouTube video and know whether the rest of it’s going to be shaky and distant. Every time you click on bad video is a vote for more bad video.

Social media has given us the false impression of a two-way street. A music fan knows the difference between performer and spectator. The stage is elevated for a reason. You’ve paid for a performance, not a conversation. You bought a seat, not a megaphone.

A MUSIC FAN BELIEVES THAT EVERY HECKLER THROWN INTO THE STREET HEADFIRST BY A BOUNCER GOT WHAT WAS COMING TO HIM.

“Freebird” as humor/irony is 25 years past its sell-by date. You may as well be yelling, “Take my wife, please.”

YOUR TEXT MESSAGES AND TWEETS CAN WAIT.

Even if you’re kind of over being told to throw your hands up in the air, do it anyway.

Tall music fans to the back of the room.

Pro tip: Follow your local music venues on Twitter as a reminder of when that show you wanted to see is about to go on sale. Or when a batch of last-minute tickets to a sold-out show just got released. Happens more than you think.

A music fan uses Shazam to identify the song playing over the end credits. And he rushes home to buy it.

They’ll change the way you listen to a song. And never for the better.

Some of the most dedicated music fans we know are anglophiles. They read Mojo. They listen to the BBC. They watch Top of the Pops. These days, the answer to “What’s next?” can often be found first across the pond, because the UK has more music influencers — DJs, television hosts, and journalists — than we have.  They’ve prioritized music in the culture the way we used to. And with the Internet, it’s all accessible to us, too.

A music fan is immediately suspicious of a musician with a long IMDb entry. It’s also natural to approach with caution people who came to us via a singing contest.

Armed with the same team of talent scouts and producers, you’d have exactly the same chance of picking America’s next big pop star as Simon Cowell.

Spotify shouldn’t replace your desire to buy albums. But it sure makes binge-listening easy. You can listen to four albums each from Tom Waits, Leonard Cohen, and Randy Newman in less time than it takes to watch a season of House of Cards on Netflix.

A music fan stops for buskers. He puts in the guitar case twice as much for an original song as he might have for “Me and Bobby McGee.” Three times if it’s being banged out on pickle jar drums.

Most of what we know about hip-hop terminology we learned from Rap Genius.
We’ve never learned anything about music from TMZ.com

There are no bad Daytrotter sessions.

Music fans never find their names on guest lists. Instead, music fans have stories of how they’ve grossly overpaid scalpers. Or got scammed on Craigslist.

$5 TO SEE A LINEUP OF HOMETOWN BANDS WAS, IS, AND WILL ALWAYS BE A BARGAIN.

A music fan asks, how can I ensure there’s more music? A music fan understands that as a patron, his role is to put money in the artists pocket.

Did we mention music fans are patrons?

The best place to buy music: direct from the artist’s merch booth at a concert. The worst: any site with a URL that ends in .ru

We’ve never met anyone who regrets investing in a good turntable.

A music fan recognizes crowdfunding as a necessary evil in the face of the collapse of the traditional music business. But a music fan only buys from a Kickstarter campaign what he would have bought anyway — the new album, a t-shirt, a remix. It’s okay not to pledge, too, to remind a musician how capitalism works.

Twitter and Facbook are great ways to get a window into what an artist believes. What inspires him. And what restaurant he likes in Chicago. It’s okay to find that interesting.

Then again, a blog post from an artist will never be more revealing than that artist standing in front of a microphone onstage and explaining why he wrote the song he’s about to play.

The exception: David Byrne. He can really write.

House concerts are brilliant. And intimate. No shady promoter. No bouncers. The musician leaves with money nobody is taking a cut of. It’s among the best things you can do with your house. And a few shades safer than pitbull rescue.

A music fan can separate the artist and the music, except when misogyny, racism, or homophobia seep into the music itself. But music fans also believe in second chances. And redemption. For everyone but R. Kelly.

A MUSIC FAN NEVER SO MUCH AS THINKS, “SHUT UP AND SING.”

In retrospect, we should have deported Ted Nugent, not the Dixie Chicks.

99 cents was, is, and will always be a bargain.

Incalculable: the number of times daily Lars Ulrich has to fight back the urge to say, “I told you so.”

A music fan doesn’t cry “sellout” until he’s looked long and hard at whether he’d take $100,000 from Doritos for a day’s work, too.

THE LATE-NIGHT TELEVISION WARS ARE GOOD FOR MUSIC.

Fallon. Kimmel. Letterman. Conan. Each wants to get the new names. Each wants to claim credit for breaking bands. Appearing on those shows might not drive sales the way it used to, but it’s great exposure and an easy way for us to discover new music. The music fan even watches bands he doesn’t like or know. Each program gets ratings data that shows when we collectively tune out. And if music is a tune-out for these programs, they’ll put more comedians in those slots. Television bookers tell us we stay with comedians we don’t know longer than bands we don’t know. That has to change.

MUSIC IS TOO PERSONAL, TOO SUBJECTIVE, TO BE ASSIGNED A MEANINGFUL RATING.

THERE’S A MUSIC BLOG FOR EVERY TASTE.

And while those tastemakers may be self-appointed, only the medium has changed — music has always been best shared by word of mouth, fan to fan.

We’ve found dozens of songs we love from top-ten lists and year-end polls. The more random the list — i.e., 10 Songs About Take-Out Chinese — the better the chance of discovery.

Any online playlist with “Greatest of All Time” in its title is just clickbait. Ignore it.