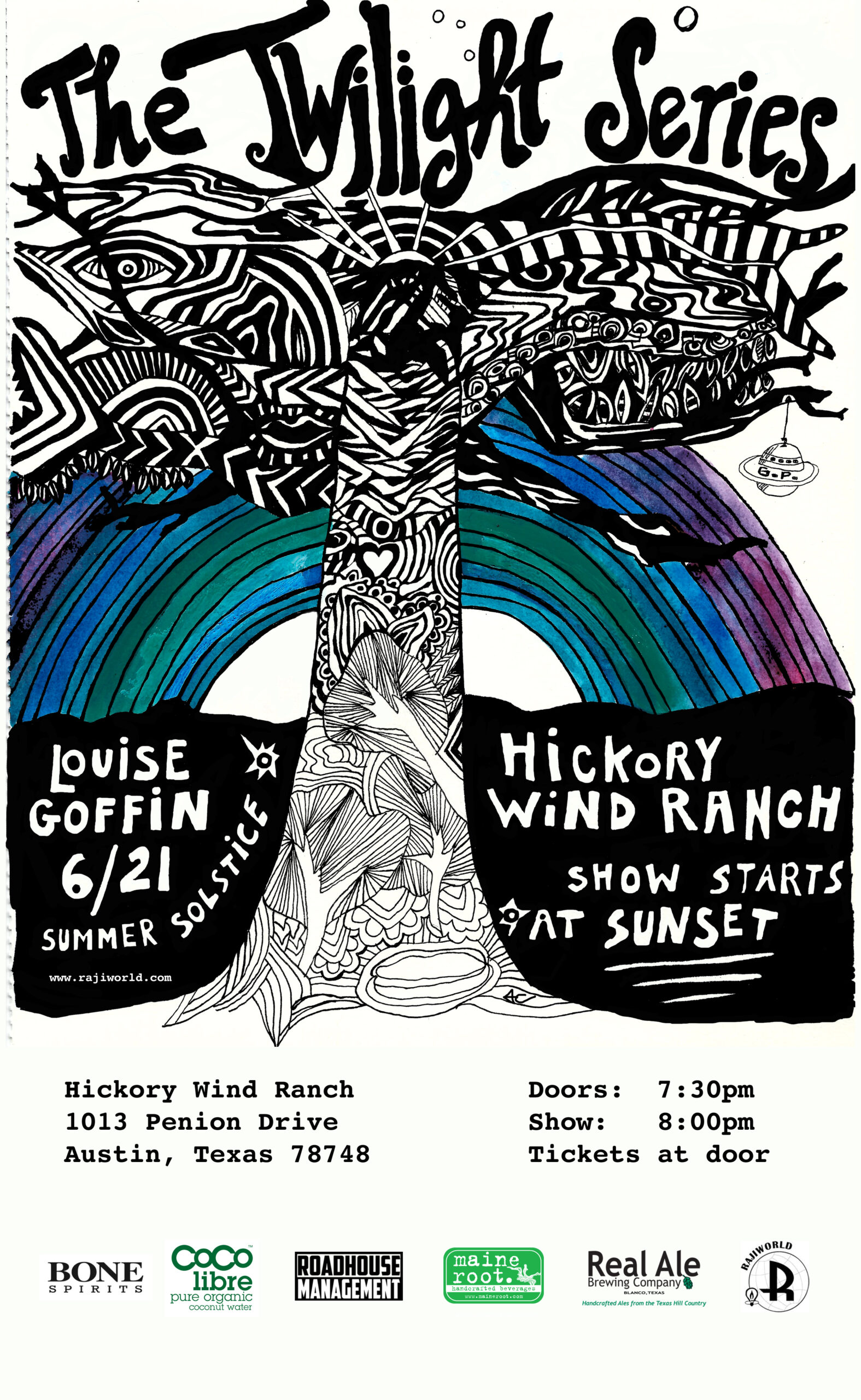 Polly Parsons and RajiWorld are proud to present the first event in The Twilight Series.

We are honored and touched to welcome Louise Goffin to Austin, please join me in showing her love during her stay here. Gerry Goffin 1939-2014 There are no words.

Please listen in June 20, 2014 on KUTX live with Jody Denberg in Studio 1A at 11 AM to hear some insight and a musical preview then  join us live June 21, 2014 for a Summer Solstice house party with the one and only Louise Goffin at Hickory Wind Ranch. We imagine an 8PM set time. Sunset is 8:38 PM that night. Louise will play 45 minutes of songs from her upcoming release Songs From The Mine. (Read more below).

We are affiliated with the Gram Parsons Foundation for this series and we are accepting a $20 donation at the door for Louise with additional donations to the foundation accepted as well. THE GRAM PARSONS FOUNDATION. A NON-PROFIT 501C3 ORGANIZATION. 33-1089879  You may pay for your advance tickets via Paypal with roggie@rajiworld.com

We will be able to hydrate and libate you with donations from our sponsors Coco Libre,  Maine Root, Bone Spirits  and Real Ale. We welcome new sponsor Christy Seguin with Cakes ROCK!!! ROCKING Custom Cakes.

Yes, she has iconic, famous parents, but that story long ago got sick of being told. And besides, it isn’t even the most interesting story to tell about Louise. You wanna hear a great story? Try this: Six years go by with no new albums from Goffin, and then suddenly at the end of 2013 she decides she simply must get one recorded right the hell now. “It was a little like those stories you hear about those pregnant mothers who haven’t got time to go into a fancy hospital with a nurse saying, ‘What number are you on the pain scale from 1- 10?’” she says, describing the birth of Songs From The Mine. “It was more like, ‘What are you talking about? I’ve got no time for this—I’m having this baby now!’” This is also the story about how Songs From The Mine turns out to be, as music writer Jon Kanis wrote, the “high point of Goffin’s professional career.” So far. Making a record wasn’t even on Louise’s radar in October 2013. Rather, she’d been “preoccupied with songwriting and playing live the last year and a half.” Then in November, two months before Louise was to perform at a MusiCares event honoring her mom, that all changed. “What made me go into the studio,” she explains, “was someone saying, ‘Hey if you’re playing at MusiCares it’d make sense for you to have some product out,’ and I thought, ‘Oh yeah, I probably could pull out an EP worth of good songs.’ I was invited to a friend’s house to play songs and it was like, ‘What’s this one?’ and then, ‘That song needs a sister song.’ By the end of the day I realized I had a full album waiting to be created.” Galvanized by this discovery, Louise was recording within days. “The quickness with which I acted was because I had produced A Holiday Carole, so I had had the recent background of me producing a whole record tip to toe and feeling fulfilled by both the experience and the result,” she notes. “I just rolled up my sleeves and said, ‘Let’s do this.’” Released on Goffin’s own Majority Of One Records, Songs From The Mine was predominantly recorded in December 2013 and early January in Los Angeles, with some recording done at the Sturgeon Bay, Wisconsin, Holiday Music Motel. Goffin produced and played piano, B-3, ukulele, and guitar, and added a touch of snare drum and tambourine. With a lifetime spent soaking up the finest music of her generation and a love of songs that “put you in a movie lyrically, or ones that sound so full of raw attitude that you could forget your insecurities,” Goffin employed a rich palette to fashion Songs From The Mine. Pure nirvana for pop melody freaks, the CD is stylishly arranged and lyrically erudite, with stand-out songs throughout; beginning with the reassuring “Everybody But You” and continuing all the way through to the buoyant “Good Life,” the light and wispy “Follow My Heart,” the playful “Watching The Sky Turn Blue” (featuring Alice Cooper and Johnny Depp on backing vocals and handclaps), the soaring “Get With The World,” the ballsy guitar rocker “We Belong Together,” and the plaintive “Some Of Them Will Fool You” contribute to an album with zero weak spots. Songs From The Mine is the latest example in a career that has been shining ever since Goffin took up the family profession at an early age. At age 14 she first sang on her mom’s record Really Rosie (the musical based on several of Maurice Sendak’s children’s books), and they later dueted together on a new version of King’s “Where You Lead” for the theme song of the hit ’00s TV show Gilmore Girls. As a songwriter and producer of A Holiday Carole, Goffin helped bring her mom back home to her love of making records and put Carole at ease in the studio. Over the years Louise has released five previous albums of her own, the last one coming in 2008, and the highly sought-after producer and go-to songwriter has also toured the world on electric guitar in Tears For Fears. “Years from now, when I conjure up memories from the spring of 2014 I will smile sweetly and remember the profundities evoked by Songs From The Mine,” wrote Kanis. With such an inspired work to offer in 2014, one can be forgiven for hoping Louise Goffin doesn’t make us wait six long years for the next one. Learn more about Louise Goffin at www.LouiseGoffin.com.