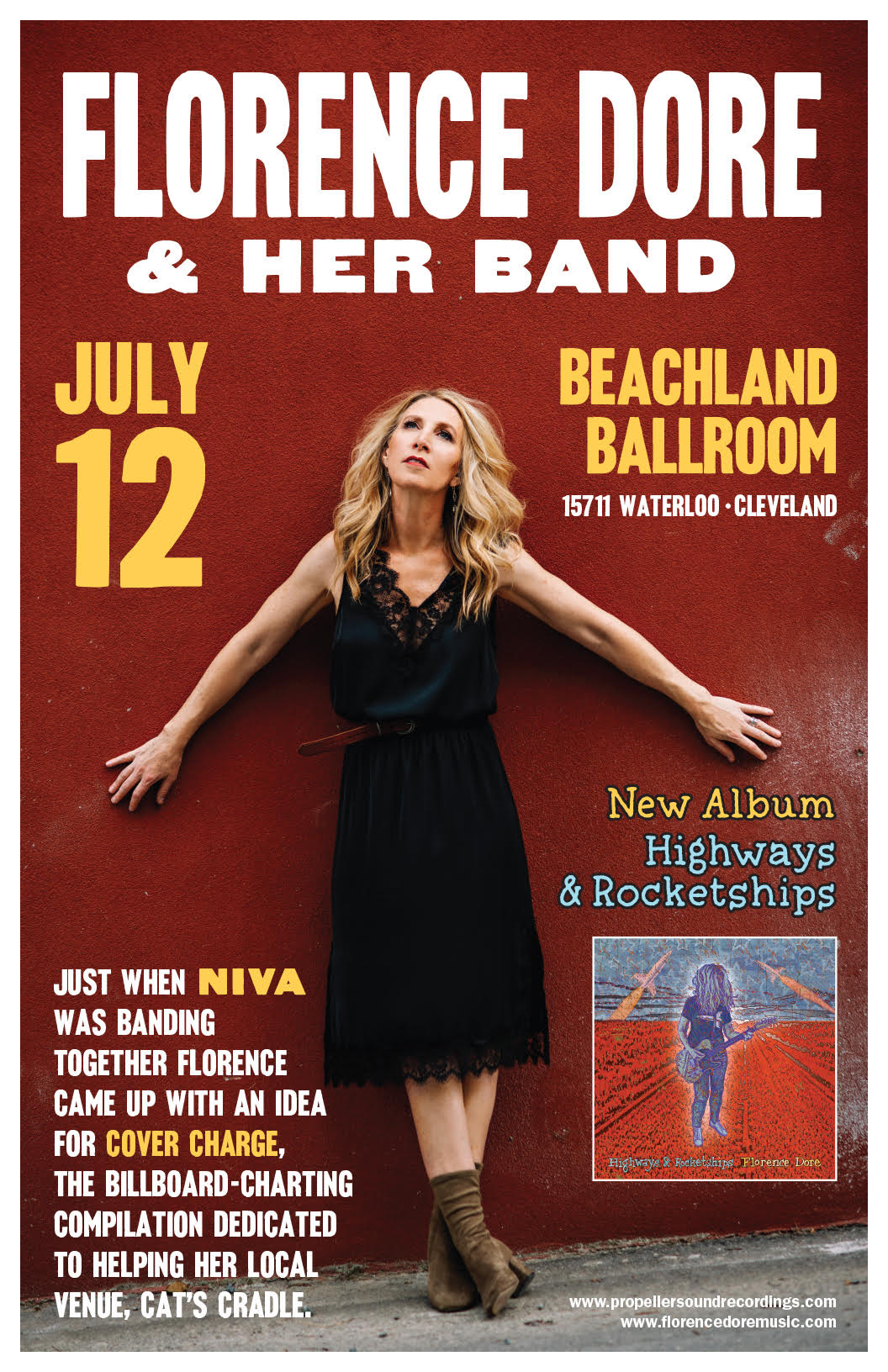 In addition to the excitement of a new client who fits RajiWorld like a glove, I am thrilled to invite all of my NIVA friends (agents and buyers) to join us at Beachland Ballroom 7/12 for a live performance!

Professor by day and rock star by night, Florence Dore has been dwelling in the space between music and literature for most of her adult existence. All the different strands of her life and career come together on Highways & Rocketships, her first solo album in 21 years. Following a series of singles, the 10-song collection will be out June 10 on Propeller Sound Recordings, the new imprint run by former R.E.M. manager Jefferson Holt and Music Geek Services founder Jay Coyle.

A native of Nashville, Dore made her first album way back in 2001, Perfect City. She was already teaching by then, too, and becoming a mother with the 2005 birth of her daughter took Dore off the road for some years. Literature became more of a focus, and she’s made her living at academic institutions like the University of North Carolina at Chapel Hill, her professional address since 2010.

But music has always been a part of Dore’s endeavors, as she taught college classes in songwriting along with contemporary fiction and the American novel. She has also put on programs and conferences at the Rock and Roll Hall of Fame and National Humanities Center with musical as well as literary stars like Steve Earle, Richard Thompson, Jonathan Lethem, Peter Guralnick and Greil Marcus. She has emerged as an acclaimed author herself, writing and editing books and magazine articles– about rock, the blues, and Bob Dylan, among other things. Her latest book, The Ink in the Grooves: Conversations on Literature and Rock ’n’ Roll, will be published in October 2022 by Cornell University Press, featuring contributions from Daniel Wallace, Rick Moody, Warren Zanes, Dave Grohl, John Jeremiah Sullivan and others.

Most of the material on Highways & Rocketships emerged in a songwriting binge over several months in 2019, “when I decided to play hooky from academic research,” Dore says. What emerged was a set of 10 lived-in, deeply personal songs about crossroads and transitions, mostly based on people she knew. What would eventually be the album’s title track emerged early in the process.

She and her bandmates convened at Easter’s posh Fidelitorium Recordings studio in the summer of 2021, with Dixon as producer – who Dore singles out for praise, along with multi-instrumentalist Holsapple.

The first single “Sweet to Me” – a song about Dore’s grandmother – also features her 16-year-old daughter Georgie Rigby and sister Katherine Dore on backing vocals. “Sweet to Me” is emotional enough that Dore has difficulty getting through it without crying, and it’s one of several songs written expressly about family members.

Indeed, the presence of drummer Rigby (who also earned a co-writing credit on the dB’s-styled “Lighter,” for rhythmic mojo that helped shape the song) makes “Highways & Rocketships” something of a family affair. “Wifi Heart” was inspired in part by Rigby’s phone calls home during his years as Steve Earle’s regular drummer. “Rebel Debutante” was written about Dore’s mother.  But the songs are also plenty clever.  Jordan Mainz put it well in his review of Dore’s recent set opening for Steve Earle, saying the new songs are “reflective and funny and semi-autobiographical, while still finding room for a little acid.”

The album’s closing note is a triumphant one with “And the Lady Goes,” which is her band’s usual onstage show-closer; the band keeps playing as she waves goodbye and leaves.  “It’s a pop song about menopause and mortality,” Dore says, laughing. “That was another song where the phrase of the title just sort of visited me and sounded cool. It had to be written. Songwriting puts you in tune with aspects of life and the human condition you might otherwise gloss over. It gets your antenna up, and it’s wonderful to be in touch with those nether reaches again.”